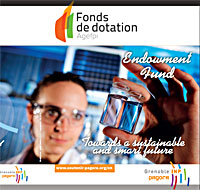 As a tool to promote and develop Grenoble INP-Pagora’s expertise, the purpose of the Agefpi Endowment Fund is to put forward innovative projects by securing new funding through donations from graduates, private individuals, student parent and companies.

The Agefpi Endowment Fund is a legal entity that is separate from the Grenoble INP-Pagora school. It meets the criteria set forth in law n°2008-776 of 4 August 2008 on the modernisation of the economy and in decree n°2009-158 of 11 February 2009 relating to endowment funds.

Biorefinery and Biomaterials: a Master for the Green Economy

Visit of a Nigerian delegation to Grenoble INP-Pagora